Luxury Bar has been raised at Calilo on Ios

For the 2020 season Calilo, the 5-star coastal estate on the unspoilt and little-known Greek island of Ios, is to open a further 10 super-luxury, totally secluded suites on picture-perfect Papas bay.

Also introduced will be 8kms of newly prepared, signposted walking trails punctuated with shady places to rest, and a sensational collection of 20 sunken rock pools, all hewn from a rocky promontory, which allow guests to cool down while connecting with the sea. Also new will be facilities for private lounging on the nearby beach of Kalamos, perfect for snorkelling in its crystal clear waters, and guests will also have access through Calilo to three other small coves. 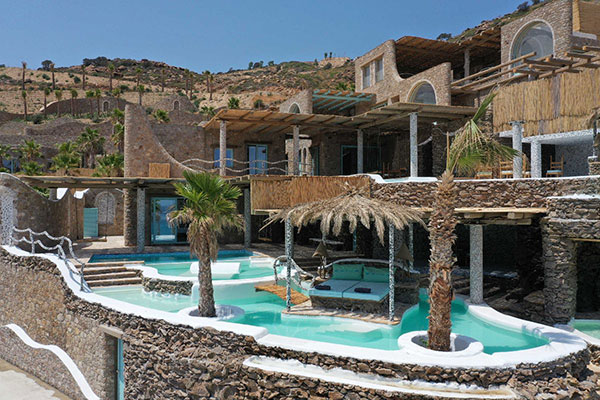 Considered to be one of the most beautiful beaches in Greece. The new suites will be even more exclusive than those opened in 2019, with panoramic sea views and absolute privacy.

They come with private open-air multi-level ponds that have been carved out of the rock beneath and feature cascading waterfalls, bridges, and submerged in-water loungers for the ultimate in cool. Completing the laid-back luxury effect are private swimming pools, hand-crafted with millions of mosaic pieces, Jacuzzis, cabanas made for two shaded by a palm tree thatch, and natural showers that are open to the elements.

Vassiliki Petridou witnessed the overdevelopment of neighbouring Mykonos and Santorini in the Cyclades, and was determined to save Ios from a similar fate.

With her husband Angelos Michalopoulos, they bought one quarter of the island, all of it coastal, and promised to develop just 1% of it in low-density development. It took the couple three full years to piece together the coastal land from 2,137 owners, resulting in what is possibly the largest private coastal conservation project.  With the problem of overtourism in mind, the figures stack up, too, with Ios boasting just 250,000 visitors compared with Santorini’s 5.5 million. 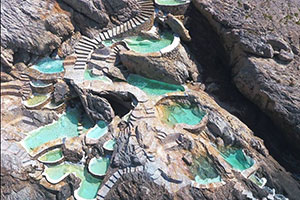 The resort’s tranquil valley setting is matched by a generous array of chill out zones, hideaway nooks, terraces, bars and a restaurant that serves produce from the market garden onsite and beyond, while the curvaceous 800m2 sandy-bottomed swimming pool that comes with sloping beach-effect sides leads down to the sea.

For yet more privacy, take a private boat, walk to one of the deserted neighbouring beaches with exclusive Calilo facilities, or borrow one of the e-bikes for an adventure on two wheels.

The new walking trails trace a route through the estate. Here more than 65,000 trees and bushes have been planted, in part to restore the habitat lost by land deforestation. Adding more than a touch of history to the estate are 535 ancient olive trees, some of them 800 years old, brought over from the Peloponnese where they were destined to be cut down for firewood. 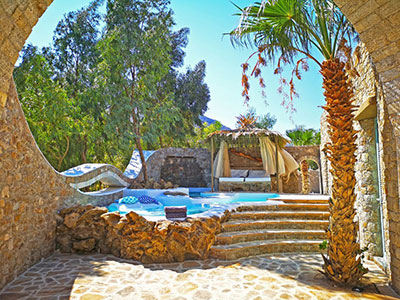 Reached by boat in 45 minutes from Santorini, in two hours from Mykonos, or just a few minutes by helicopter (from €250pp) , this 70 sq mile island boasts some 365 chapels as well as 36 pristine golden sandy beaches, only a handful of which have been commercialised with many being reached only by boat or dirt track.

Not only is the epic poet Homer meant to have seen his last sunset on the island (his grave is said to be at Plakoto), but it is also home to Skarkos, the oldest known Bronze Age settlement (2,500BC). Once a hippie haven for those who left Matala on Crete, the island is little-visited, save for the hill-top town of Chora and the single sandy beach of Mylopotas, which currently attracts a young crowd, as well as families with children.

PRICE: A suite at Calilo (calilo.com) ranges in price per night from €349 - €2,499 depending upon size, number of bedrooms and location.

In 2020 Calilo will be open from 1 June until the end of September.