Every year up to 75 girls and boys set out on their school and, ultimately, career journey when they join the Reception Class at Bolton School Infants’ School. A significant proportion will have progressed up from Bolton School’s adjacent Nursery or Nursery Class for 3 and 4 year olds but many are new to the School. Whatever path lies ahead for them, their parents know that they are giving them the very best start in life as they enjoy the fun, creativity and learning that takes place in this Infant School where the Early Years Foundation Stage (EYFS) is consistently ranked as “outstanding” by the Independent Schools’ Inspectorate (ISI).

After three years at the co-educational Infant School, pupils move up to either the Girls’ or Boys’ Division of the Bolton School Foundation, which include Junior and Senior Schools with Sixth Forms. Like the EYFS findings, the latest ISI reports awarded both divisions with the top mark of “excellent” in all categories.

As an academically selective independent day school, there is a clear focus on stretching and challenging every pupil.  Students reach their full 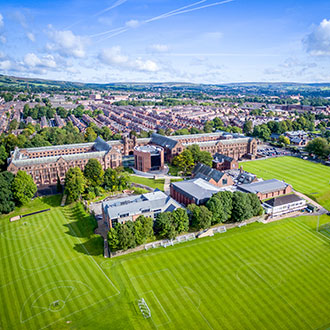 potential through a wide range of extra-curricular activities, regular visits to the School’s outdoor pursuits centre, volunteering and foreign travel.

The curriculum is delivered by a highly qualified, experienced and dedicated teaching staff, who create an industrious and supportive environment where pupils are motivated to learn. Annual GCSE and A level results place the School amongst the best independent schools in the North and often within the top 100 nationally. The vast majority of students go on to their first choice university and there is a regular flow of sixth formers to highly competitive courses.

Bolton School regularly wins awards for its educational offer. Last year it was the TES’ Independent School of the Year and the Independent School Parent Magazine’s School of the Year. The School became the first school to achieve the Queen’s Award for Voluntary Service (the MBE for volunteering). Also last year, the school won the Fundraiser of the Year Award, a campaign which helps some pupils pay less or no fees and the year before that, the school won the TES’ Community Initiative Award and the MEN’s Active Community Award.

To find out more about us or to arrange your personal tour during term time, please call 01204 840201 or visit www.boltonschool.org.